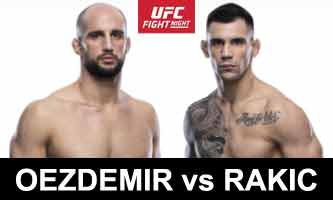 Review by AllTheBestFights.com: 2019-12-21, some good exchanges between Volkan Oezdemir and Aleksandar Rakic but it is not enough to get three stars: it gets two.

Volkan Oezdemir entered this fight with a mma record of 16-4-0 (81% finishing rate) and he is ranked as the No.10 light heavyweight in the world (currently the #1 in this division is Jon Jones) but between 2018 and 2019 he lost three consecutive fights, the last one with Dominick Reyes (Dominick Reyes vs Volkan Oezdemir); after this bout he has beat Ilir Latifi (Volkan Oezdemir vs Ilir Latifi).
His opponent, Aleksandar Rakic, has an official record of 12-1-0 (83% finishing rate) and he entered as the No.18 in the same weight class. He suffered his only loss at his pro mma debut against Christian Radke in 2011, since then he has won 12 consecutive bouts defeating Justin Ledet, Devin Clark and Jimi Manuwa in his last three (Jimi Manuwa vs Aleksandar Rakic). Oezdemir vs Rakic is on the undercard of Frankie Edgar vs Chan Sung Jung – UFC Fight Night 165. Watch the video and rate this fight!