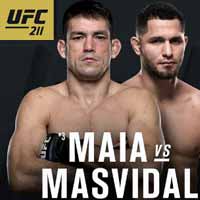 Review by AllTheBestFights.com: 2017-05-13, disappointing fight between Demian Maia and Jorge Masvidal: it gets two stars.

The black belt in Bjj and 2007 ADCC champion Demian Maia entered this fight with a mma record of 24-6-0 (62% finishing rate) and he is ranked as the No.3 welterweight in the world (currently the #1 in this division is Tyron Woodley). He suffered two consecutive defeats between 2013 and 2014, against Jake Shields (=Maia vs Shields) and Rory MacDonald (=MacDonald vs Maia), but then he has won six bouts beating Matt Brown (=Maia vs Brown) and Carlos Condit in 2016 (=Maia vs Condit).
His opponent, Jorge Masvidal, has an official record of 32-11-0 (47% finishing rate) and he entered as the No.5 in the same weight class. He lost two consecutive fights between 2015 and 2016, against Benson Henderson (=Henderson vs Masvidal) and Lorenz Larkin (=Masvidal vs Larkin) but then he has defeated Ross Pearson, Jake Ellenberger (=Ellenberger vs Masvidal) and Donald Cerrone (=Cerrone vs Masvidal). Demian Maia vs Jorge Masvidal is on the undercard of Stipe Miocic vs Junior dos Santos 2 – UFC 211. Watch the video and rate this fight!