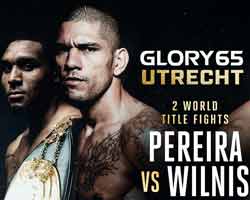 Review by AllTheBestFights.com: 2019-05-17, good finish between Alex Pereira and Jason Wilnis 3: it gets three stars.

The current Glory Mw and former Wako world champion Alex Pereira entered this fight with a pro record of 39-6-0 (27 knockouts) and he is ranked as the No.1 cruiserweight in the world. He lost to Yousri Belgaroui in 2017, but then he has won five bouts taking revenge on Belgaroui (Alex Pereira vs Yousri Belgaroui 2 and Alex Pereira vs Yousri Belgaroui 3) and beating Simon Marcus in his last one (Alex Pereira vs Simon Marcus 2).
His opponent, the former Glory Mw champ Jason Wilnis, has an official record of 31-9-1 (8 knockouts) and he entered as the No.4 in the same weight class but he lost three out of his last four bouts, the last one against Simon Marcus last year (Simon Marcus vs Jason Wilnis 4); after this fight he has beat Jacob Rodriguez in 2019. In both their previous bouts Wilnis had defeated Pereira, via tko in 2012 and via unanimous decision in 2015 (Jason Wilnis vs Alex Pereira 2); this third fight, main event of Glory 65, is valid for the Glory middleweight title (Pereira’s fourth defense). Watch the video and rate this fight!