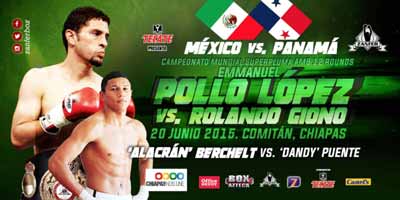 Review by AllTheBestFights.com: 2015-06-20, nice toe-to-toe fight between Emanuel Lopez and Rolando Giono: it gets three stars.

Emanuel Lopez entered this fight with a professional boxing record of 18-4-1 (7 knockouts) and he is ranked as the No.89 super featherweight in the world while his opponent, Rolando Giono, has an official record of 17-5-0 (11 knockouts). Lopez suffered his last defeat last year when he faced Marco Isaias Gonzalez, after this bout he has won three consecutive bouts beating Carlos Padilla in his last one (=Lopez vs Padilla). ‘Pollo’ Lopez vs Giono is valid for the interim WBA World super featherweight title. Watch the video and rate this fight!