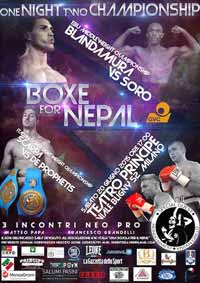 Review by AllTheBestFights.com: 2015-06-20, pretty good finish between Michel Soro and Emanuele Blandamura but it is not enough to get three stars: it gets two.

Michel Soro entered this fight with a pro boxing record of 26-1-1 (16 knockouts) and he is ranked as the No.16 middleweight in the world. His only defeat occurred in 2012, against Zaurbek Baysangurov (bout valid for the Wbo and Ibo super-Ww titles), after losing he has collected eight victories and one draw, against Antoine Douglas (=Soro vs Douglas); he beat Glen Tapia in his last fight (=Tapia vs Soro).
His opponent, Emanuele Blandamura, has a record of 23-1-0 (5 knockouts) and he entered as the No.57 in the same weight class. He fought three times last year beating Marcos Nader (=Nader vs Blandamura) and Matiouze Royer but between these two bouts he suffered his only defeat, against Billy Joe Saunders (=Saunders vs Blandamura). Soro vs Blandamura is valid for the vacant EBU (European) middleweight title. Watch the video and rate this fight!