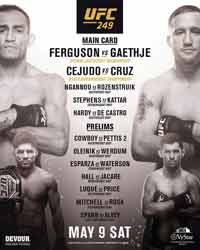 Review by AllTheBestFights.com: 2020-05-09, disappointing fight between Carla Esparza and Michelle Waterson: it gets two stars.

The former Ufc and Invicta FC champion Carla Esparza entered this fight with a pro mma record of 15-6-0 (47% finishing rate) and she is ranked as the No.6 women’s strawweight in the world. She lost two consecutive bouts in 2018, with Claudia Gadelha and Tatiana Suarez, but then she has won over Virna Jandiroba and Alexa Grasso (Carla Esparza vs Alexa Grasso).
Her opponent, the black belt in American freestyle karate and former Invicta Fc atomweight champ Michelle Waterson, has a record of 17-7-0 (71% finishing rate) and she entered as the No.11 in the same weight class. She fought twice last year beating Karolina Kowalkiewicz (Karolina Kowalkiewicz vs Michelle Waterson) and losing to Joanna Jedrzejczyk (Joanna Jedrzejczyk vs Michelle Waterson). Esparza vs Waterson is on the undercard of Tony Ferguson vs Justin Gaethje – UFC 249. Watch the video and rate this fight!