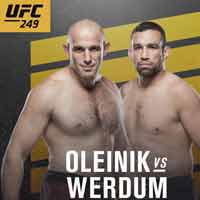 Review by AllTheBestFights.com: 2020-05-09, pretty good fight between Alexey Oleynik and Fabricio Werdum: it gets three stars.

The black belt in Bjj, jujutsu and 2005 world combat sambo champion Alexey Oleynik entered this fight with a professional mma record of 58-13-1 (93% finishing rate) and he is ranked as the No.17 heavyweight in the world but he lost two out of his last three bouts, against Alistair Overeem (Alistair Overeem vs Alexey Oleynik) and Walt Harris (Alexey Oleynik vs Walt Harris); after these fights he has beat Maurice Green (Alexey Oleynik vs Maurice Greene).
His opponent, the black belt in judo, Brazilian jiu-jitsu and former Ufc Hw champ Fabricio Werdum, has an official record of 23-8-1 (74% finishing rate) but he is not ranked as he hasn’t fought since March 17, 2018 when he was defeated by Alexander Volkov (Fabricio Werdum vs Alexander Volkov); before this bout, in 2017, he had beat Walt Harris (Werdum vs Harris) and Marcin Tybura (Fabricio Werdum vs Marcin Tybura). Oleinik vs Werdum is on the undercard of Tony Ferguson vs Justin Gaethje – UFC 249. Watch the video and rate this fight!