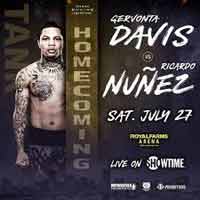 Review by AllTheBestFights.com: 2019-07-27, boring fight between Jezzrel Corrales and Ladarius Miller: it gets one star!

The former Wba super-Fw champion Jezzrel Corrales entered this fight with a boxing record of 23-2-0 (9 knockouts) and he is ranked as the No.13 super featherweight in the world. He lost to Alberto Machado in 2017 (Jezreel Corrales vs Alberto Machado) but he came back to win against Onalvi Sierra in 2019.
His opponent, Ladarius Miller, has an official record of 19-1-0 (6 knockouts) and he entered as the No.61 lightweight. He suffered his only loss when he faced Rolando Chinea in 2016 but since the he has collected ten consecutive victories beating Daulis Prescott in hi last one. Corrales vs Miller is on the undercard of Gervonta Davis vs Ricardo Nunez. Watch the video and rate this fight!