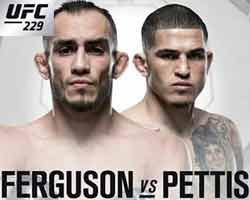 Review by AllTheBestFights.com: 2018-10-06, nice and tough exchanges between Tony Ferguson and Anthony Pettis: it gets three stars (UFC Fight of the Night).

The black belt in 10th Planet Jiu-Jitsu (no-gi Bjj) and Tuf 13 tournament winner Tony Ferguson entered this fight with a professional mma record of 23-3-0 (78% finishing rate) and he is ranked as the No.3 lightweight in the world (currently the #1 in this division is Khabib Nurmagomedov). ‘El Cucuy’ Ferguson suffered his last defeat when he faced Michael Johnson in 2012, since then he has collected ten consecutive victories beating Landon Vannata (4-stars fight, Ferguson vs Vannata), Rafael dos Anjos (dos Anjos vs Ferguson) and Kevin Lee in his last three (Tony Ferguson vs Kevin Lee).
His opponent, the black belt in tae-kwon-do, Bjj and former Ufc Lw champion Anthony Pettis, has an official record of 21-7-0 (81% finishing rate) and he entered as the No.6 in the same weight class but he won just three out of his last eight bouts. He lost to Dustin Poirier at the end of 2017 (Dustin Poirier vs Anthony Pettis) but he came back to win against Michael Chiesa in 2018 (Anthony Pettis vs Michael Chiesa). Ferguson vs Pettis is on the undercard of Khabib Nurmagomedov vs Conor McGregor – UFC 229. Watch the video and rate this fight!

(Free embeddable video hosted on Youtube and not uploaded by AllTheBestFights)
https://www.youtube.com/watch?v=9je4OCcHPUQ