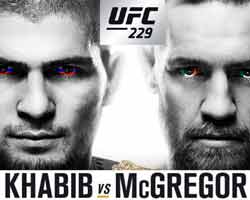 Review by AllTheBestFights.com: 2018-10-06, great fight between Khabib Nurmagomedov and Conor McGregor: it gets three stars.

The undefeated black belt in judo, two time combat sambo world champion and Ufc Lw champ Khabib Nurmagomedov entered this fight with a perfect record of 26-0-0 (62% finishing rate) and he is ranked as the No.1 lightweight in the world. After suffering different injuries between 2014 and 2015, he fought twice in 2016 winning over Darrell Horcher (Nurmagomedov vs Horcher) and Michael Johnson (Johnson vs Nurmagomedov), and twice between 2017 and 2018 beating Edson Barboza (Khabib Nurmagomedov vs Edson Barboza) and Al Iaquinta (Khabib Nurmagomedov vs Al Iaquinta).
His opponent, the former Ufc Fw and Lw champ Conor McGregor, has an official mma record of 21-3-0 (90% finishing rate) but he is not ranked as he hasn’t fought since November 12, 2016 when he defeated Eddie Alvarez (Eddie Alvarez vs Conor McGregor). Before this bout, in 2016, ‘The Notorius’ had faced Nate Diaz twice losing the first bout (4-stars fight, McGregor vs Diaz I) and winning the second one (Diaz vs McGregor II). McGregor vs Khabib main event of Ufc 229, is valid for the Ufc lightweight title (Khabib’s first defense). Watch the video and rate this fight!