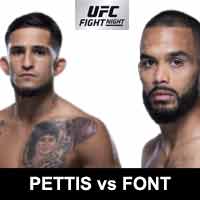 Review by AllTheBestFights.com: 2018-12-15, some good exchanges between Sergio Pettis and Rob Font but it is not enough to get three stars: it gets two.

The black belt in tae-kwon-do Sergio Pettis entered this fight with a mma record of 17-4-0 (35% finishing rate) and he is ranked as the No.4 flyweight in the world but he lost two out of his last three fights, against current #1 Ufc Flw champion Henry Cejudo (Henry Cejudo vs Sergio Pettis) and Jussier Formiga (Jussier Formiga da Silva vs Sergio Pettis); between these two bouts he beat Joseph Benavidez (Joseph Benavidez vs Sergio Pettis).
His opponent, Rob Font, has an official record of 15-4-0 (73% finishing rate) and he entered as the No.22 bantamweight and he also lost two out of his last three bouts, with Pedro Munhoz (Munhoz vs Font) and Raphael Assuncao (Raphael Assuncao vs Rob Font); between these two defeats he won over Thomas Almeida (Thomas Almeida vs Rob Font). Pettis vs Font is on the undercard of Kevin Lee vs Al Iaquinta 2 – UFC on Fox 31. Watch the video and rate this fight!