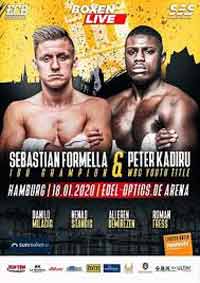 Review by AllTheBestFights.com: 2020-01-18, some good exchanges between Sebastian Formella and Roberto Arriaza but it is not enough to get three stars: it gets two.

The undefeated Sebastian Formella entered this fight with a perfect record of 21-0-0 (10 knockouts) and he is ranked as the No.21 welterweight in the world. In his last three fights he has won over Ilias Essaoudi, Betuel Ushona and Thulani Mbenge (Thulani Mbenge vs Sebastian Formella).
His opponent, Roberto Arriaza, has a boxing record of 18-1-0 (14 KOs=78%) and he entered as the No.90 in the same weight class. He suffered his only loss when he faced Egidijus Kavaliauskas in 2018 (Egidijus Kavaliauskas vs Roberto Arriaza), after this bout he has beat Addir Sanchez. Formella vs Arriaza is valid for the IBO World welterweight title (Formella’s first defense). Watch the video and rate this fight!