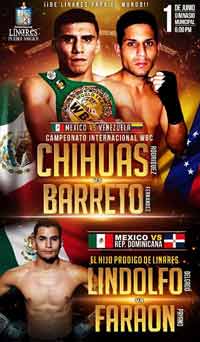 Review by AllTheBestFights.com: 2019-06-01, some good exchanges between Francisco Rodriguez Jr and David Barreto but it is not enough to get three stars: it gets two.

The former Wbo and Ibf minimumweight champion Francisco Rodriguez Jr entered this fight with a boxing record of 30-4-1 (21 knockouts) and he is ranked as the No.12 super flyweight in the world. ‘Chihuas’ Rodriguez lost to Moises Fuentes in 2015 (Rodriguez vs Fuentes) but since then he has won eleven consecutive bouts beating Hernan Marquez (Francisco Rodriguez Jr vs Hernan Marquez) and Oswaldo Novoa in his last two (Francisco Rodriguez Jr vs Oswaldo Novoa).
His opponent, the undefeated David Barreto, has a perfect boxing record of 12-0-0 (12 KOs=100%) and he entered as the No.34 flyweight. In his last three fights he has won over Arbey Puerta, Jose Vasquez and Marcelo Carrasquel. Rodriguez vs Barreto is valid for the vacant WBC International Silver super flyweight title. Watch the video and rate this fight!