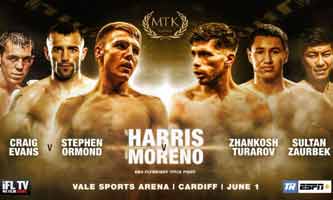 Review by AllTheBestFights.com: 2019-06-01, pretty good fight between Jay Harris and Angel Moreno: it gets three stars.

The undefeated Jay Harris entered this fight with a perfect record of 15-0-0 (8 knockouts) and he is ranked as the No.53 flyweight in the world. In his last three fights he has won over Cristian Narvaez, Ross Murray and Brett Fidoe.
His opponent, Angel Moreno, has a boxing record of 19-3-2 (6 knockouts) and he entered as the No.39 in the same weight class but he comes off the loss against Charlie Edwards (Charlie Edwards vs Angel Moreno); before this bout, in 2018, he had beat Pablo Narvaez in June and Cristian Narvaez in October. Harris vs Moreno is valid for the vacant EBU European flyweight title. Watch the video and rate this fight!