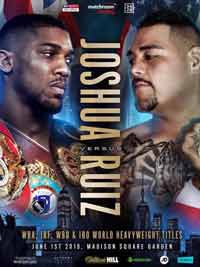 Review by AllTheBestFights.com: 2019-06-01, disappointing fight between Josh Kelly and Ray Robinson: it gets two stars.

The undefeated former Olympian Josh Kelly entered this fight with a perfect boxing record of 9-0-0 (6 knockouts) and he is ranked as the No.24 welterweight in the world. In his last three bouts he has won over Kris George (Josh Kelly vs Kris George), Walter Fabian Castillo (Josh Kelly vs Walter Fabian Castillo) and Przemyslaw Runowski (Josh Kelly vs Przemyslaw Runowski).
His opponent, Ray Robinson, has an official record of 24-3-1 (12 knockouts) and he entered as the No.26 in the same weight class but he won just one out of his last three fights, against Breidis Prescott in 2017; after this bout he lost to Yordenis Ugas in 2018 (Yordenis Ugas vs Ray Robinson) and has tied with Egidijus Kavaliauskas in 2019 (Egidijus Kavaliauskas vs Ray Robinson). Kelly vs Robinson is valid for the WBA International welterweight title; undercard of Anthony Joshua vs Andy Ruiz Jr. Watch the video and rate this fight!