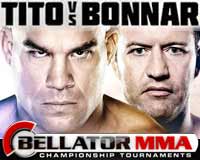 Review: 2014-11-15, pretty good fight between Tito Ortiz and Stephan Bonnar: it gets three stars. The former Ufc light-Hw champion Tito Ortiz entered this fight with a professional mma record of 17-11-1 (71% finishing rate) and he is ranked as the No.15 light heavyweight in the world, he is 39 years old (two years older than Bonnar) and he had retired from mma in 2012 after three consecutive losses in the Ufc (the last one against Forrest Griffin, Griffin vs Ortiz 3) but he came back to fight in 2014 under Bellator promotion beating Alexander Shlemenko (=Shlemenko vs Ortiz).
His opponent, the black belt in Bjj and tae-kwon-do Stephan Bonnar, has an official record of 15-8-0 (67% finishing rate) but he is not ranked as he hasn’t fought since October 13, 2012 when he was defeated by Anderson Silva (=Silva vs Bonnar). Ortiz vs Bonnar is the main event of Bellator 131. Watch the video and rate this fight!

Video:
(Free embeddable video hosted on Ok.ru and not uploaded by AllTheBestFights, to report it please visit this link where the video is hosted)