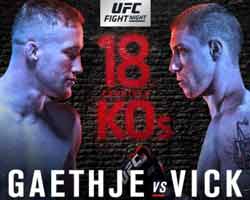 Review by AllTheBestFights.com: 2018-08-25, good exchanges between Justin Gaethje and James Vick: it gets three stars (UFC Performance of the Night).

The former Wsof Lw champion Justin Gaethje entered this fight with a professional mma record of 18-2-0 (89% finishing rate) and he is ranked as the No.14 lightweight in the world but he comes off two consecutive defeats, against Dustin Poirier in 2018 (4-stars fight, Dustin Poirier vs Justin Gaethje) and Eddie Alvarez in December 2017 (Eddie Alvarez vs Justin Gaethje). Before this bout, in July 2017, he had won over Michael Johnson (Mma Fight of the year 2017 candidate, Johnson vs Gaethje).
His opponent, James Vick, has an official record of 13-1-0 (62% finishing rate) and he entered as the No.16 in the same weight class. He suffered his only loss when he faced Beneil Dariush in 2016, after this bout he has won over Abel Trujillo (Abel Trujillo vs James Vick), Polo Reyes, Joseph Duffy and Francisco Trinaldo (James Vick vs Francisco Trinaldo). Gaethje vs Vick is the main event of UFC Fight Night 135. Watch the video and rate this fight!

(Free embeddable video hosted on Youtube and not uploaded by AllTheBestFights)
https://www.youtube.com/watch?v=78P99zdHp8U