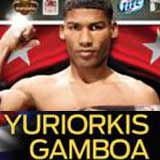 Review: 2014-11-15, fight not particularly good between Yuriorkis Gamboa and Joel Montes de Oca: it gets two stars. The 2004 Olympic flyweight gold medalist Yuriorkis Gamboa entered this fight with a pro boxing record of 23-1-0 (16 knockouts) and he is ranked as the No.12 lightweight in the world while his opponent, Joel Montes de Oca, has a record of 18-3-0 (10 knockouts). Gamboa has fought once in 2014 suffering his first professional loss, against the undefeated Terence Crawford in a bout valid for the Wbo belt (Crawford vs Gamboa). Gamboa vs Montes de Oca is on the undercard of Alejandra Oliveras vs Erica Farias. Watch the video and rate this fight!