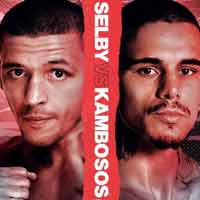 Review by AllTheBestFights.com: 2020-10-31, fight not particularly exciting between Lee Selby and George Kambosos Jnr but it is not enough to get three stars: it gets two.
The former Ibf Fw champion Lee Selby entered this fight with a boxing record of 28-2-0 (9 knockouts) and he is ranked as the No.4 lightweight in the world (currently the #1 in this division is Teofimo Lopez). He lost to Josh Warrington in 2018 (Lee Selby vs Josh Warrington) but then he has beat Omar Douglas (Lee Selby vs Omar Douglas) and Ricky Burns (Lee Selby vs Ricky Burns).
His opponent, the undefeated George Kambosos Jnr, has a perfect record of 18-0-0 (10 knockouts) and he entered as the No.16 in the same weight class. In his last three fights he has won over Rey Perez, Richard Pena and Mickey Bey. Kambosos vs Selby, IBF lightweight title eliminator, is on the undercard of Oleksandr Usyk vs Dereck Chisora. Watch the video and rate this fight!