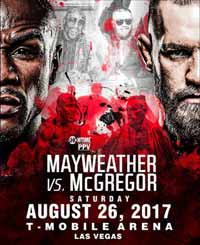 Review by AllTheBestFights.com: 2017-08-26, good performance by both boxers: Gervonta Davis vs Francisco Fonseca gets three stars.

Both undefeated, the IBF super-Fw champion Gervonta Davis entered this fight with a perfect record of 18-0-0 (17 KOs=94%) and he is ranked as the No.7 super featherweight in the world (currently the #1 in this division is Vasyl Lomachenko) while his opponent, Francisco Fonseca, has a boxing record of 19-0-1 (13 knockouts) and he entered as the No.49 in the same weight class. Davis has already fought twice in 2017: winning over Jose Pedraza (=Pedraza vs Davis) and Liam Walsh (=Davis vs Walsh) while Fonseca has fought once defeating Eliecer Lanzas. Gervonta Davis vs Francisco Fonseca was valid for the IBF World Super Featherweight title but Gervonta Davis missed weight, two pounds higher than the limit and stripped of the belt; undercard of Floyd Mayweather Jr vs Conor McGregor. Watch the video and rate this fight!