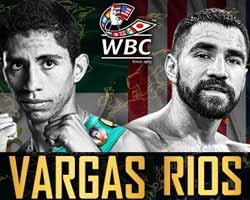 Review by AllTheBestFights.com: 2017-08-26, nice exchanges between Rey Vargas and Ronny Rios: it gets three stars.

The undefeated Wbc super-Bw champion Rey Vargas entered this fight with a perfect record of 29-0-0 (22 KOs=76%) and he is ranked as the No.12 super bantamweight in the world (currently the #1 in this division is Guillermo Rigondeaux). In his last three bouts he has beat Alexis Boureima Kabore (=Vargas vs Kabore), Alexander Munoz (=Vargas vs Munoz) and Gavin McDonnell (=Vargas vs McDonnell).
His opponent, Ronny Rios, has a boxing record of 28-1-0 (13 knockouts) and he entered as the No.9 in the same weight class. He suffered his only loss when he faced Robinson Castellanos in 2014 (=Rios vs Castellanos), since then he has won five bouts beating Daniel Noriega in 2017. Rey Vargas vs Ronny Rios is valid for the WBC World Super Bantamweight title (Vargas’ first defense); undercard of Miguel Cotto vs Yoshihiro Kamegai. Watch the video and rate this fight!