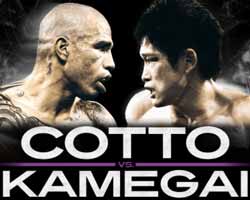 Review by AllTheBestFights.com: 2017-08-26, great performance by both fighters: Miguel Cotto vs Yoshihiro Kamegai gets three stars.

The former world champion in four different weight classes Miguel Angel Cotto entered this fight with a boxing record of 40-5-0 (33 KOs=82%) but he is not ranked as he hasn’t fought since November 21, 2015 when he was defeated by Saul Canelo Alvarez (=Cotto vs Canelo). Before this bout the Puerto Rican had won three consecutive fights beating Delvin Rodriguez (=Cotto vs Rodriguez), Sergio ‘Maravilla’ Martinez (=Martinez vs Cotto) and Daniel Geale (=Cotto vs Geale).
His opponent, Yoshihiro Kamegai, has an official record of 27-3-2 (24 KOs=89%) and he entered as the No.20 super welterweight in the world. He lost to Alfonso Gomez in 2015 (=Gomez vs Kamegai) but then he has collected two victories and one draw beating Jesus Soto Karass in his last fight (=Soto Karass vs Kamegai 2). Miguel Cotto vs Yoshihiro Kamegai is valid for the vacant WBO World Super Welterweight title. Watch the video and rate this fight!