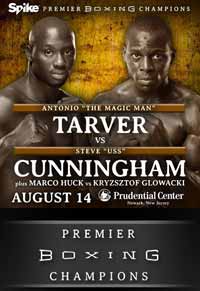 Review by AllTheBestFights.com: 2015-08-14, it is a waste of time watching this fight: Artur Szpilka vs Yasmany Consuegra gets one star.

Artur Szpilka entered this fight with a boxing record of 19-1-0 (14 knockouts) and he is ranked as the No.16 heavyweight in the world. He suffered his only loss when he faced Bryant Jennings last year (=Jennings vs Szpilka), after this bout he has won three fights beating Manuel Quezada in his last one (=Szpilka vs Quezada).
His opponent, Yasmany Consuegra, has an official record of 17-1-0 (14 KOs=82%) and he comes off the loss against Dominic Breazeale. Szpilka vs Consuegra is on the undercard of Antonio Tarver vs Steve Cunningham. Watch the video and rate this fight!