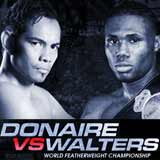 Review: 2014-10-18, great fight between Nonito Donaire and Nicholas Walters: it gets three stars. Nonito Donaire entered this fight with a professional record of 33-2-0 (21 knockouts) and he is ranked as the No.1 featherweight in the world, he suffered his second loss in 2013 when he faced the undefeated Guillermo Rigondeaux (=Donaire vs Rigondeaux); after that bout he beat Vic Darchinyan (=Donaire vs Darchinyan 2) and Simpiwe Vetyeka winning his fifth world title in five different weight classes (=Donaire vs Vetyeka).
His opponent, the undefeated Nicholas Walters, has a perfect record of 24-0-0 (20 KOs=83%) and he entered as the No.6 in the same weight class, he has fought once in 2014 beating Vic Darchinyan (=Walters vs Darchinyan). Donaire vs Walters is valid for the WBA Super World featherweight title (Donaire’s first defense); undercard of Gennady Golovkin vs Marco Antonio Rubio. Watch the video and rate this fight!