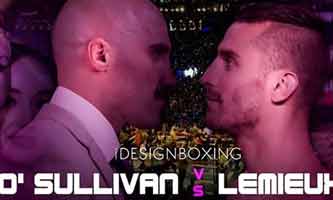 Review by AllTheBestFights.com: 2018-09-15 , good finish between David Lemieux and Gary O’Sullivan: it gets three stars.

The former Ibf Mw champion David Lemieux entered this fight with a record of 39-4-0 (33 KOs=85%) and he is ranked as the No.11 middleweight in the world. He lost to Billy Joe Saunders last year (Billy Joe Saunders vs David Lemieux) but he came back to win with Karim Achour in 2018.
His opponent, Gary O’Sullivan, has a boxing record of 28-2-0 (20 knockouts) and he entered as the No.16 in the same weight class. He lost to Chris Eubank Jr in 2015 (Chris Eubank Jr vs Gary O’Sullivan) but then he has won six consecutive bouts defeating Nick Quigley, Antoine Douglas and Berlin Abreu in his last three (Gary O’Sullivan vs Berlin Abreu). Lemieux vs O’Sullivan is on the undercard of Gennady Golovkin vs Saul Canelo Alvarez 2. Watch the video and rate this fight!

(Free embeddable video hosted on youtube and not uploaded by AllTheBestFights)
https://www.youtube.com/watch?v=TaU0HzqLUKg