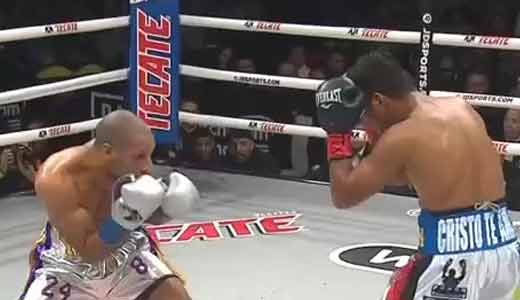 Review by AllTheBestFights.com: 2020-02-29, great fight thanks to a high pace from the first bell: Khalid Yafai vs Roman Gonzalez is one of the best boxing fights of the year 2020 and it gets four stars! Moreover this match was ranked in the ‘Top 10 Boxing Fights of the Year 2020‘ (ranking generated by our users).

The undefeated former Olympian and Wba super-Flw champion Khalid Yafai entered this fight with a perfect boxing record of 26-0-0 (15 knockouts) and he is ranked as the No.4 super flyweight in the world (currently the #1 in this division is Juan Francisco Estrada). In his last three fights he has won over David Carmona (Khalid Yafai vs David Carmona), Israel Gonzalez (Khalid Yafai vs Israel Gonzalez) and Norbelto Jimenez (Khalid Yafai vs Norbelto Jimenez).
His opponent, the former world champion in four different weight classes Roman Gonzalez, has a record of 48-2-0 (40 KOs=83%) and he entered as the No.5 in the same weight class. ‘Chocolatito’ Gonzalez lost two consecutive bouts in 2017, both against Srisaket Sor Rungvisai (controversial decision, boxing Fight of the Year candidate, Roman Gonzalez vs Srisaket Sor Rungvisai I and Srisaket Sor Rungvisai vs Roman Gonzalez II), but then he has defeated Moises Fuentes (Roman Gonzalez vs Moises Fuentes) and Diomel Diocos. Kal Yafai vs Gonzalez is valid for the WBA World super flyweight title (Yafai’s sixth defense); undercard of Mikey Garcia vs Jessie Vargas. Watch the video and rate this fight!