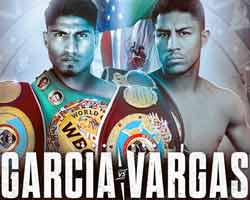 Review by AllTheBestFights.com: 2020-02-29, fight not so exciting between Mikey Garcia and Jessie Vargas: it gets two stars.

The world champ in four different weight classes Mikey Garcia entered this fight with a professional boxing record of 39-1-0 (30 knockouts) and he is ranked as the No.8 welterweight in the world (currently the #1 in this division is Terence Crawford) but he comes off his first loss against Errol Spence Jr (Errol Spence Jr vs Mikey Garcia); before this bout, in 2018, he had beat Sergey Lipinets (Mikey Garcia vs Sergey Lipinets) and Robert Easter Jr (Mikey Garcia vs Robert Easter Jr).
His opponent, the former world champion in two different weight classes Jessie Vargas, has an official record of 29-2-2 (11 knockouts) and he entered as the No.6 super welterweight. He lost to Manny Pacquiao in 2016 (Pacquiao vs Vargas) but then he has collected two draws and two victories; in his last two bouts he has tied with Thomas Dulorme (Jessie Vargas vs Thomas Dulorme) and he has beat Humberto Soto (Jessie Vargas vs Humberto Soto). Garcia vs Vargas is valid for the vacant WBC Diamond welterweight title. Watch the video and rate this fight!