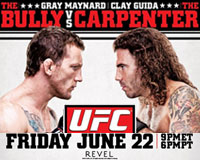 Review: 2012-06-22, pretty boring fight between Gray Maynard and Clay Guida: one star; don’t waste time searching or watching the full fight video, we suggest you to watch only the last minute of the fourth round or the hightlights. Gray Maynard (10-1-1) entered as the No.5 lightweight in the world while Clay Guida (29-12-0) entered as the No.10. Maynard vs Guida is the main event of UFC on FX 4. Rate the video!