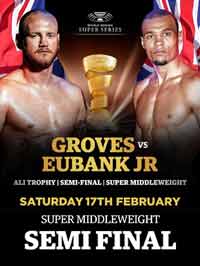 Review by AllTheBestFights.com: 2018-02-17, fight not particularly good between Jack Arnfield and Tommy Langford: it gets two stars.

Jack Arnfield entered this fight with a pro boxing record of 25-2-0 (6 knockouts) and he is ranked as the No.17 middleweight in the world. He suffered his last defeat when he faced Nick Blackwell in 2015 (Blackwell vs Arnfield), after this bout he has won six fights beating Mick Hall, Brian Rose (Brian Rose vs Jack Arnfield) and Adam Jones in 2017.
His opponent, Tommy Langford, has an official boxing record of 19-1-0 (6 knockouts) and he entered as the No.43 in the same weight class. He fought twice last year losing to Avtandil Khurtsidze (Tommy Langford vs Avtandil Khurtsidze) and beating Miguel Aguilar. Langford vs Arnfield is valid for the BBBofC British middleweight title; undercard of Chris Eubank Jr vs George Groves. Watch the video and rate this fight!