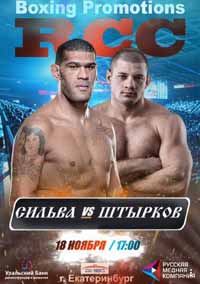 Review by AllTheBestFights.com: 2016-11-18, exciting back and forth fight between Antonio Silva and Ivan Shtyrkov: it is close to get four stars!

The black belt in judo, karate and Brazilian jiu-jitsu Antonio Bigfoot Silva entered this fight with a professional mma record of 19-10-1 (89% finishing rate) and he is ranked as the No.28 heavyweight in the world while his opponent, the undefeated Ivan Shtyrkov, has an official record of 4-0-0 (100% finishing rate). Both fighters have fought twice in 2016: ‘Pezao’ Silva has lost twice, against Stefan Struve (=Silva vs Struve) and Roy Nelson (=Nelson vs Silva), while Shtyrkov has beat Jeff Monson and Georgy Sakaev. Silva vs Shtyrkov is the main event of “Titov Boxing Promotion Silva vs Shtyrkov”. Watch the video and rate this fight!