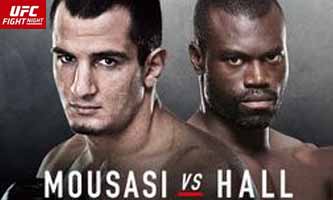 Review by AllTheBestFights.com: 2015-09-26, Gegard Mousasi vs Uriah Hall gets three stars thanks to a good finish (UFC Performance of the Night).

The black belt in judo and former Strikeforce and Dream champion Gegard Mousasi entered this fight with a pro mma record of 37-5-2 (84% finishing rate) and he is ranked as the No.5 middleweight in the world (currently the #1 in this division is Chris Weidman). He lost to Ronaldo ‘Jacare’ Souza in 2014 (=Jacare vs Mousasi 2) but then he came back to win beating Dan Henderson (=Henderson vs Mousasi) and Costas Philippou (=Mousasi vs Philippou).
His opponent, the black belt in karate Uriah Hall, has a record of 11-5-0 (82% finishing rate) and he entered as the No.32 in the same weight class. He has already fought three times in 2015 winning over Ron Stallings (=Hall vs Stallings) and Oluwale Bamgbose, but between these two bouts he was defeated by Rafael Natal. Mousasi vs Hall is on the undercard of Josh Barnett vs Roy Nelson – UFC Fight Night 75; they also faced each other a second time on November 19, 2016 (=Gegard Mousasi vs Uriah Hall 2). Watch the video and rate this fight!