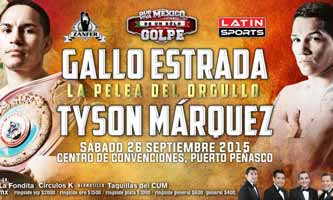 Review by AllTheBestFights.com: 2015-09-26, great fight with a spectacular finish: Juan Francisco Estrada vs Hernan Marquez is close to get four stars!

Juan Francisco Estrada entered this fight with a pro boxing record of 32-2-0 (23 knockouts) and he is ranked as the No.2 flyweight in the world. He suffered his last loss in 2012 when he faced #1 Roman Gonzalez (=Gonzalez vs Estrada), since then he has won six consecutive bouts winning over Rommel Asenjo in his last one (=Estrada vs Asenjo).
His opponent, the former Wba Flw champion Hernan Marquez, has an official record of 39-5-1 (28 knockouts) and he entered as the No.37 super-flyweight. ‘Tyson’ Marquez lost to McJoe Arroyo (=Marquez vs Arroyo) and drew with Ricardo Roman in 2014, but he came back to win in 2015 beating Roberto Lopez and Jose Alfredo Tirado. ‘El Gallo’ Estrada vs Marquez is valid for the WBA and WBO World flyweight titles (both held by Estrada). Watch the video and rate this fight!