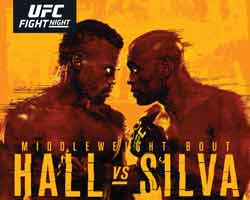 Review by AllTheBestFights.com: 2020-10-31, fight not so exciting between Uriah Hall and Anderson Silva: it gets two stars.
The black belt in karate Uriah Hall entered this fight with a professional mma record of 15-9-0 (80% finishing rate) and he is ranked as the No.15 middleweight in the world. He lost to Paulo Henrique Borrachinha Costa in 2018 (Uriah Hall vs Paulo Costa) but then he has beat Bevon Lewis and Antonio Carlos Junior (Uriah Hall vs Antonio Carlos Jr).
His opponent, the 45-year-old (9 years older than Hall) black belt in Bjj, tae-kwon-do and former Ufc Mw champion Anderson Silva, has an official record of 34-10-0 (76% finishing rate) but he is not ranked as he hasn’t fought since May 11, 201 when he was defeated by Jared Cannonier (Anderson Silva vs Jared Cannonier); before this bout he had also lost to Israel Adesanya in February 2019 (Israel Adesanya vs Anderson Silva) and he had beat Derek Brunson in 2017 (Anderson Silva vs Derek Brunson). Silva vs Hall is the main event of the UFC Fight Night 181 (also known as UFC on ESPN+ 39 or UFC Vegas 12); this should be the retirement fight of Anderson ‘The Spider’ Silva. Watch the video and rate this fight!