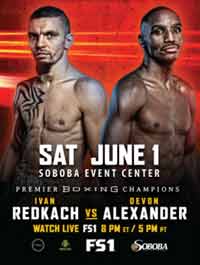 Review by AllTheBestFights.com: 2019-06-01, good finish between Devon Alexander and Ivan Redkach: it gets three stars.

The former world champion in two different weight classes Devon Alexander entered this fight with a professional record of 27-5-1 (14 knockouts) and he is ranked as the No.27 welterweight in the world but he won just one out of his last five bouts, against Walter Castillo in 2017 (Devon Alexander vs Walter Castillo); after this fight he has tied with Victor Ortiz (Devon Alexander vs Victor Ortiz) and has lost to Andre Berto (via split decision, Andre Berto vs Devon Alexander).
His opponent, Ivan Redkach, has an official record of 22-4-1 (17 KOs=77%) and he entered as the No.109 super lightweight. He suffered two consecutive losses in 2017, against Argenis Mendez and John Molina Jr (John Molina Jr vs Ivan Redkach) but then he has beat Brian Jones and Tyrone Harris. Alexander vs Redkach is the main event of the evening. Watch the video and rate this fight!