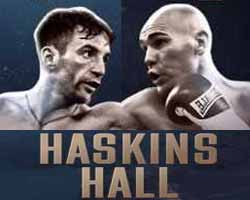 Review by AllTheBestFights.com: 2016-09-10, some good exchanges between Lee Haskins and Stuart Hall 2 but it is not enough to get three stars: it gets two.

The Ibf Bw champion Lee Haskins entered this fight with a pro record of 33-3-0 (14 knockouts) and he is ranked as the No.5 bantamweight in the world (currently the #1 in this division is Shinsuke Yamanaka). He suffered his last loss when he faced Stephane Jamoye in 2012 (=Haskins vs Jamoye), since then he has won seven consecutive bouts beating Ivan Morales in 2016 (=Haskins vs Morales).
His opponent, the former Ibf Bw champion Stuart Hall, has a record of 20-4-2 (7 knockouts) and he entered as the No.10 in the same weight class. He suffered two consecutive defeats in 2014, against Paul Butler (=Hall vs Butler) and Randy Caballero (=Caballero vs Hall), but then he has won four fights defeating Rodrigo Guerrero in his last one (=Guerrero vs Hall). In their first bout Haskins beat Hall via unanimous decision (July 7, 2012); this second fight is valid for the IBF World bantamweight title and it is on the undercard of Gennady Golovkin vs Kell Brook. Watch the video and rate this fight!