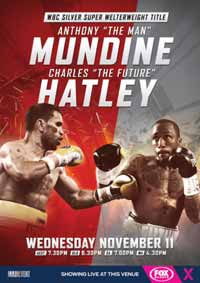 Review by AllTheBestFights.com: 2015-11-11, some good exchanges between Anthony Mundine and Charles Hatley but it is not enough to get three stars: it gets two.

The former Wba super-Mw champion Anthony Mundine entered this fight with a pro boxing record of 47-6-0 (27 knockouts) and he is ranked as the No.18 super welterweight in the world. He lost to Joshua Clottey last year (=Mundine vs Clottey) but then he came back to win against Sergey Rabchenko (=Mundine vs Rabchenko).
His opponent, Charles Hatley, has a record of 25-1-1 (17 knockouts) and he entered as the No.36 in the same weight class. He suffered his only defeat in 2012 when he faced Lanardo Tyner, since then he has won 8 consecutive bouts beating Saul Roman in his last one. Mundine vs Hatley is valid for the WBC Silver super welterweight title. Watch the video and rate this fight!