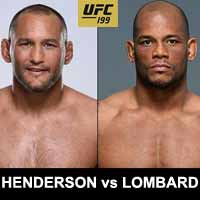 Review by AllTheBestFights.com: 2016-06-04, nice and tough exchanges between Dan Henderson and Hector Lombard: it is close to get four stars (UFC Performance of the Night).

The formner Ufc, Pride and Strikeforce champion Dan Henderson entered this fight with a professional record of 31-14-0 (55% finishing rate) and he is ranked as the No.12 middleweight in the world but he won just one out of his last four bouts, against Tim Boetsch (=Boetsch vs Henderson); after this fight, his last one, Hendo was defeated by Vitor Belfort (=Belfort vs Henderson 3).
His opponent, the black belt in Bjj, judo and former Bellator Mw champion Hector Lombard, has a mma record of 34-5-1 (76% finishing rate) and he entered as the No.18 welterweight. He fought just once last year, winning over Josh Burkman (result then overturned after he tested positive for anabolic steroids, Lombard vs Burkman) and then he has lost to Neil Magny in 2016 (=Lombard vs Magny). Henderson vs Lombard is on the undercard of Luke Rockhold vs Michael Bisping 2 – UFC 199. Watch the video and rate this fight!