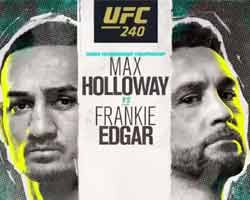 Review by AllTheBestFights.com: 2019-07-27, some good single shots between Max Holloway and Frankie Edgar but it is not enough to get three stars: it gets two.

The Ufc Fw champion Max Holloway entered this fight with a pro mma record of 20-4-0 (60% finishing rate) and he is ranked as the No.1 featherweight in the world even if he comes off the loss against Dustin Poirier, because in this fight he moved up in weight class (Max Holloway vs Dustin Poirier 2); before this bout, in 2018, he had beat Brian Ortega (Max Holloway vs Brian Ortega).
His opponent, the black belt in Brazilian jiu-jitsu and former Ufc Lw champion Frankie Edgar, has a record of 23-6-1 (48% finishing rate) but he is not ranked as he hasn’t fought since April 21, 2018 when he defeated Cub Swanson (Frankie Edgar vs Cub Swanson 2); before this fight, in March 2018, he had lost to Brian Ortega (Frankie Edgar vs Brian Ortega). Holloway vs Edgar, main event of Ufc 240, is valid for the Ufc featherweight title. Watch the video and rate this fight!