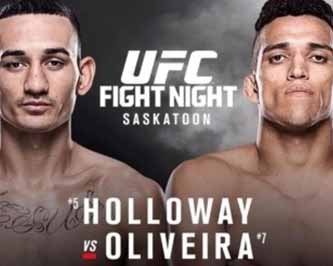 Review by AllTheBestFights.com: 2015-08-23, Max Holloway vs Charles Oliveira gets two stars…we hope to see a rematch.

Max Holloway entered this fight with a professional mma record of 13-3-0 (54% finishing rate) and he is ranked as the No.6 featherweight in the world (currently the #1 in this division is Jose Aldo). He suffered two consecutive defeats in 2013, against Dennis Bermudez and Conor McGregor (=McGregor vs Holloway), but then he has won six bouts beating Cub Swanson in his last fight (=Cub Swanson vs Max Holloway).
His opponent, the black belt in Bjj Charles Oliveira, has an official record of 20-4-0 (90% finishing rate) and he entered as the No.7 in the same weight class. He also suffered his last loss in 2013, against Frankie Edgar (=Edgar vs Oliveira), but since then he has won four fights defeating Nik Lentz in his last one (=Lentz vs Oliveira 2). Holloway vs Oliveira is the main event of UFC Fight Night 74. Watch the video and rate this fight!