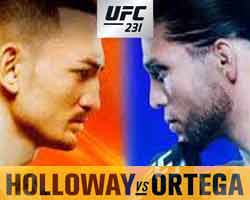 Review by AllTheBestFights.com: 2018-12-08, great fight between Max Holloway and Brian Ortega: it gets three stars (UFC Fight of the Night, UFC Performance of the Night).

The Ufc Fw champion Max Holloway entered this fight with a professional record of 19-3-0 (58% finishing rate) and he is ranked as the No.1 featherweight in the world. He suffered two consecutive defeats in 2013, against Dennis Bermudez and Conor McGregor (McGregor vs Holloway), but then he has won twelve consecutive bouts beating Anthony Pettis (Holloway vs Pettis) and Jose Aldo in his last three (Aldo vs Holloway I and Max Holloway vs Jose Aldo II).
His opponent, the undefeated black belt in Bjj Brian Ortega, has a perfect mma record of 14-0-0 (71% finishing rate) and he entered as the No.2 in the same weight class. Between 2017 and 2018 he has fought three times winning over Renato Moicano Carneiro (Carneiro vs Ortega), Cub Swanson (Cub Swanson vs Brian Ortega) and Frankie Edgar (Frankie Edgar vs Brian Ortega). Holloway vs Ortega, main event of UFC 231, is valid for the Ufc featherweight title (Holloway’s second defense). Watch the video and rate this fight!

(Free embeddable video hosted on Youtube and not uploaded by AllTheBestFights)
https://www.youtube.com/watch?v=oYsilpb42tU