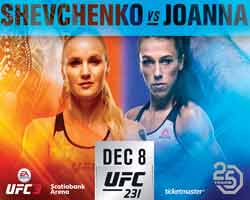 Review by AllTheBestFights.com: 2018-12-08, fight not so exciting between Valentina Shevchenko and Joanna Jedrzejczyk: it gets two stars.

The black belt in tae-kwon-do, judo and former Wako, Wmf and Kunlun fight kickboxing champion Valentina Shevchenko entered this fight with a pro mma record of 15-3-0 (73% finishing rate) and she is ranked as the No.1 women’s flyweight in the world. She lost to current #1 Ufc women’s Bw champion Amanda Nunes last year (via split decision, Nunes vs Shevchenko 2) but she came back to win in 2018 with Priscila Cachoeira (Valentina Shevchenko vs Priscila Cachoeira).
Her opponent, the former Wkn kickboxing and former Ufc strawweight champ Joanna Jedrzejczyk, has an official record of 15-2-0 (33% finishing rate) and she entered as the No.3 women’s strawweight. She lost two consecutive bouts between 2017 and 2018, against current #1 Rose Namajunas (Joanna Jedrzejczyk vs Rose Namajunas I and Rose Namajunas vs Joanna Jedrzejczyk II), but then she came back to win with Tecia Torres (Joanna Jedrzejczyk vs Tecia Torres). They already faced each other three times with muay thai rules (between 2006 and 2008) and Valentina won the three bouts; Shevchenko vs Jedrzejczyk is valid for the vacant Ufc Women’s flyweight title; undercard of Max Holloway vs Brian Ortega – UFC 231. Watch the video and rate this fight!

(Free embeddable video hosted on Youtube and not uploaded by AllTheBestFights)
https://www.youtube.com/watch?v=lWjZkAJMEmY