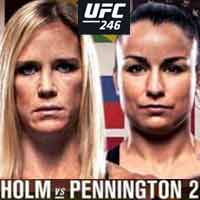 Review by AllTheBestFights.com: 2020-01-18, disappointing fight between Holly Holm and Raquel Pennington 2: it gets two stars.

The former Ufc and Wbc, Wba, Wbf, Iba boxing champion Holly Holm entered this fight with a pro mma record of 12-5-0 (67% ko/tko victory rate – she has never won via submission) and she is ranked as the No.3 women’s bantamweight in the world but she won just two out of her last seven fights, her last victory was against Megan Anderson in 2018 (Holly Holm vs Megan Anderson) but then, in 2019, she lost to Amanda Nunes (Amanda Nunes vs Holly Holm).
Her opponent, Raquel Pennington, has a record of 10-7-0 (40% finishing rate) and she entered as the No.5 in the same weight class. She lost two consecutive bouts in 2018, against Amanda Nunes and Germaine de Randamie, but she came back to win with Irene Aldana in 2019. In their first bout Holm had defeated Pennington via split decision (February 28, 2015 – Holly Holm vs Raquel Pennington I); this second fight is on the undercard of Conor McGregor vs Donald Cerrone – UFC 246. Watch the video and rate this fight!