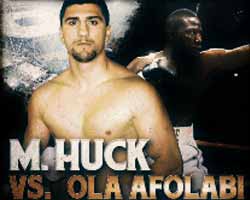 Review by AllTheBestFights.com: 2016-02-27, disappointing fight between Marco Huck and Ola Afolabi: it gets two stars.

Ola Afolabi entered this fight with a professional boxing record of 22-4-4 (11 knockouts) and he is ranked as the No.7 cruiserweight in the world (currently the #1 in this division is Grigory Drozd). He fought twice last year losing to Victor Emilio Ramirez (=Afolabi vs Ramirez) but then he beat Rakhim Chakhkiev in one of the best boxing fights of the year 2015 (=Chakhkiev vs Afolabi).
His opponent, the former Wbo Cw champion Marco Huck, has an official record of 38-3-1 (26 knockouts) and he entered as the No.13 in the same weight class but he comes off the loss against Krzysztof Glowacki (=Huck vs Glowacki). In their first and third previous bouts Huck defeted Afolabi (=Huck vs Afolabi 3) while their second fight ended in a draw (=Huck vs Afolabi 2). Afolabi vs Huck 4 is valid for the IBO World cruiserweight title (Afolabi’s first defense). Watch the video and rate this fight!