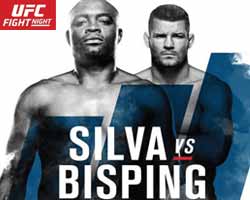 Review by AllTheBestFights.com: 2016-02-27, entertaining fight thanks to a good performance by both fighters: Anderson Silva vs Michael Bisping gets three stars (UFC Fight of the Night).

The black belt in Bjj, judo, tae-kwon-do and former Ufc Mw champion Anderson Silva entered this fight with a professional mma record of 33-6-0 (79% finishing rate) and he is ranked as the No.15 middleweight in the world. ‘The Spider’ is 40 years old (four years older than Bisping) and he suffered two consecutive losses in 2013 against Chris Weidman (=Silva vs Weidman I and Weidman vs Silva II – in this second fight Silva broke his left fibula and tibia); after this bout he came back to win in 2015, against Nick Diaz (=Silva vs Diaz) but then the result was overturned in a no-contest beacuase both fighters tested positive.
His opponent, the Tuf 3 light-Hw winner Michael Bisping, has an official record of 27-7-0 (70% finishing rate) and he entered as the No.9 in the same weight class. He lost to #1 Ufc Mw champion Luke Rockhold in 2014 (=Rockhold vs Bisping) but then he has won over CB Dollaway (=Bisping vs Dollaway) and Thales Leites (=Bisping vs Leites). ‘The Spider’ Silva vs Bisping is the main event of the UFC Fight Night 84. Watch the video and rate this fight!