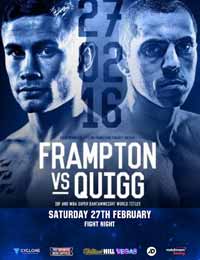 Review by AllTheBestFights.com: 2016-02-27, pretty good fight between Gavin McDonnell and Jorge Sanchez: it gets three stars.

Both undefeated, the Englishman Gavin McDonnell entered this fight with a boxing record of 14-0-2 (4 knockouts) and he is ranked as the No.33 super bantamweight in the world while his opponent, Jorge Sanchez, has a perfect official record of 15-0-0 (9 knockouts) and he entered as the No.58 featherweight. McDonnell fought twice in 2015 beating Oleksandr Yegorov (=McDonnell vs Yegorov) and Jeremy Parodi (=McDonnell vs Parodi) while Sanchez fought just once defeating Hernan Cortez. McDonnell vs Sanchez is valid for the vacant WBC Silver super bantamweight title; undercard of Carl Frampton vs Scott Quigg. Watch the video and rate this fight!