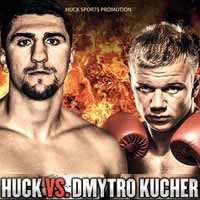 Review by AllTheBestFights.com: 2016-11-19, too much holding and too many interruptions between Marco Huck and Dmytro Kucher: it gets two stars.

The former Wbo champion Marco Huck entered this fight with a boxing record of 39-3-1 (27 knockouts) and he is ranked as the No.5 cruiserweight in the world (currently the #1 in this division is Oleksandr Usyk). He lost to Krzysztof Glowacki in 2015 (=Huck vs Glowacki) but he came back to win in 2016 with Ola Afolabi (=Afolabi vs Huck 4).
His opponent, Dmytro Kucher, has an official record of 24-1-1 (18 KOs=75%) and he entered as the No.17 in the same weight class. He suffered his only loss when he faced Ilunga Makabu in 2013 (via majority decision), since then he has collected three victories and one draw beating Enzo Maccarinelli in 2016 (=Maccarinelli vs Kucher). Huck vs Kucher is valid for the IBO World cruiserweight title (Huck’s first defense). Watch the video and rate this fight!