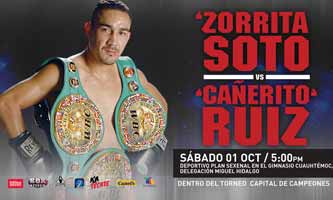 Review by AllTheBestFights.com: 2016-10-01, pretty good start between Humberto Soto and Daniel Ruiz but it is not enough to get three stars: it gets two.

The former world champion in three different weight classes Humberto Soto entered this fight with a record of 65-9-2 (35 knockouts) and he is ranked as the No.15 super lightweight in the world while his opponent, Daniel Ruiz, has a boxing record of 34-9-2 (24 knockouts). Both boxers have lost their last bout: Soto was defeated by Antonio Orozco (=Orozco vs Soto) while “Canerito” Ruiz lost to Aik Shakhnazaryan. ‘La Zorrita’ Soto vs Ruiz is the main event of the evening. Watch the video and rate this fight!