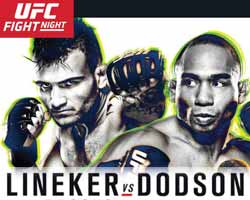 Review by AllTheBestFights.com: 2016-10-01, some good exchanges in the second part of the bout but it is not enough to get three stars: John Lineker vs John Dodson gets two.

John Lineker entered this fight with a professional mma record of 28-7-0 (60% finishing rate) and he is ranked as the No.5 bantamweight in the world (currently the #1 in this division is Dominick Cruz). He suffered his last loss when he faced Ali Bagautinov in 2014 (=Lineker vs Bagautinov), since then he has won five bouts beating Rob Font and Michael McDonald in 2016 (=McDonald vs Lineker).
His opponent, the black belt in gaidojutsu and Tuf 14 Bw tournament winner John Dodson, has an official record of 18-7-0 (61% finishing rate) and he entered as the No.7 in the same weight class. He lost to Demetrious Johnson last year (=Johnson vs Dodson 2) but he came back to win in 2016 against Manny Gamburyan. Lineker vs Dodson is the main event of the UFC Fight Night 96. Watch the video and rate this fight!