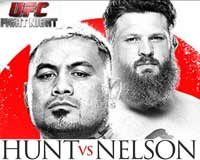 Review: 2014-09-20, Mark Hunt vs Roy Nelson gets three stars only thanks to a good finish (UFC Performance of the Night). The 40-year-old Mark Hunt (two years older than Nelson) entered this fight with a professional mma record of 9-8-1 (67% ko/tko victory rate – he has never won via submission) and he is ranked as the No.7 heavyweight in the world (currently the #1 in this division is Cain Velasquez); he fought three times last year defeating Stefan Struve (=Struve vs Hunt) but then he was beat by #2 Junior dos Santos (=Dos Santos vs Hunt) and he drew against Antonio ‘Bigfoot’ Silva in one of the most exciting fights of 2013 (4-stars-fight Bigfoot vs Hunt).
His opponent, the black belt in Brazilian jiu-jitsu Roy Nelson, has an official record of 20-9-0 (90% finishing rate) and he entered as the No.12 in the same weight class, he lost two consecutive bouts in 2013, against Stipe Miocic (=Nelson vs Miocic) and Daniel Cormier (=Cormier vs Nelson), but he came back to win in 2014 beating Antonio Rodrigo ‘Minotauro’ Nogueira (=Nogueira vs Nelson). ‘Big Country’ Nelson vs Hunt is the main event of UFC Fight Night 52. Watch the video and rate this fight!