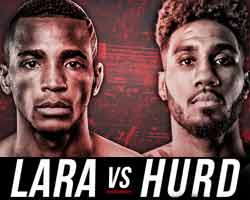 Review by AllTheBestFights.com: 2018-04-07, nice and tough fight between Erislandy Lara and Jarrett Hurd: it gets three stars.

The Ibo and Wba super-Ww champion Erislandy Lara entered this fight with a record of 25-2-2 (14 knockouts) and he is ranked as the No.1 super welterweight in the world. He suffered his last loss when he faced Saul ‘Canelo’ Alvarez in 2014 (via split decision, Canelo vs Lara), since then he has won six bouts beating Yuri Foreman (Lara vs Foreman) and Terrell Gausha in 2017 (Erislandy Lara vs Terrell Gausha).
His opponent, the undefeated Ibf light-Mw champion Jarrett Hurd, has a perfect record of 21-0-0 (15 knockouts) and he entered as the No.3 in the same weight class. In his last three bouts he has won over Ionut Dan Ion (Hurd vs Dan), Tony Harrison (Hurd vs Harrison) and Austin Trout (Jarrett Hurd vs Austin Trout). Lara vs Hurd is valid for the IBF, IBO and WBA World super welterweight titles. Watch the video and rate this fight!